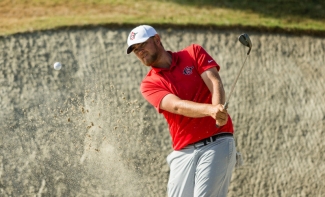 Photo:  Trevor Norby (left) and Blake Abercrombie are tied for fifth after each shot a 69 in round one of the MW Championship on Friday.  Courtesy goaztecs.com

April 20, 2018 (Bremerton, Wash.) - The San Diego State men’s golf team finds itself in a three-way tie for first place along with Colorado State and UNLV after shooting a combined 4-under-par 284 on Friday during the first round of the 2018 Mountain West Championship at Golf Mountain Golf Club.

After languishing near the bottom of the standings midway through the round, the Aztecs regrouped in a big way down the stretch, posting a collective 11 birdies against zero bogeys over the final five holes to vault back into contention on the par-72, 7,115-yard Olympic Course.

SDSU sports three players among the individual top 20, including Blake Abercrombie (Rocklin, Calif) and Trevor Norby (Carlsbad, Calif.), who remain in a four-way tie for fifth after each fired a 3-under 69, along with New Mexico’s Galven Green and Wyoming’s Drew McCullough.

Abercrombie began with an inauspicious bogey, but quickly righted the ship with a birdie at No. 2, followed by an eagle on the par-5, 563-yard No. 6. After another bogey on the ensuing green, the Aztec senior played spot-free golf the rest of the way, highlighted by additional drains at the par-5 14th and the par-3 No. 16.

Norby, meanwhile, sank four birdies of his own to go with a team-best 13 pars. Among the conversions for the SDSU sophomore was an impressive make on the par-4, 460-yard No. 1, which ranked as the toughest hole of the day.

With their results, Abercrombie and Norby sit three shots behind front-runner AJ Ott of Colorado State, who logged an opening-round 66, while Nevada’s Grant Booth, UNLV’s Shintaro Ban and San José State’s Sean Talmadge are all tied for second after each recorded a 68.

In addition, PJ Samiere (Kailua, Hawaii) ended the day in a tie for 15th after shooting a 72. The Aztec senior was 3-over for the round after notching his fourth bogey of the afternoon on the par-3 12th. The reigning California State Amateur champion closed with a flurry, however, reeling off three consecutive birdies on Nos. 14-16, the last of which ranked as the sixth-most difficult hole on Friday.

Elsewhere, Puwit Anupansuebsai (Nakhon Phanom, Thailand) overcame four bogeys on the front nine to complete his first-ever round at the MW Championship in a tie for 24th with a 2-over 74. The SDSU freshman picked up some much-needed momentum with a birdie on the par-4 10th. Despite a bogey on the 12th green, Anupansuebsai managed to finish strong like the rest of the Aztec delegation, posting four pars as well as back-to-back birdies at Nos. 14-15.

The SDSU starting five also included Pablo Matesanz (Irun, Spain), who landed in a tie for 47th after notching a 78 in his debut round at the MW Championship. The  Aztec senior weathered a rough stretch of four bogeys and a triple over a nine-hole span, before finishing with three pars to go with birdies at No. 14 and No. 16.

The Mountain West Championship continues on Saturday when San Diego State tees off alongside Colorado State and UNLV starting at 10:40 a.m. on hole No. 1. A live scoring link, courtesy of Golfstat, will be available on GoAztecs.com.