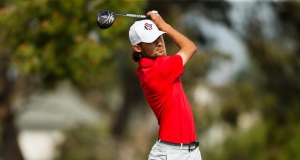 February 19, 2019 (La Quinta, Calif.) - The San Diego State men’s golf team remains in 16th place at The Prestige presented by Charles Schwab after carding a 14-over-par 298 during the second round Tuesday on the par-71, 7,100-yard Greg Norman Course at PGA West.

Despite shaving seven strokes from their previous day’s score, the Aztecs were unable to gain on the rest of the field and find themselves 10 shots out the top 10 with a 54-hole total of 35-over 603.

Three of the five Aztec starters lost ground on the individual leaderboard, including Otto Vanhatalo (Espoo, Finland), who dropped two places into a tie for 37th at 6-over 148 after recording his second straight 74. Starting on the 10th tee, the SDSU senior countered three bogeys with a trio of birdies on the back nine, including an impressive conversion on the par-4, 470-yard No. 2, which ranks as the fourth-toughest hole of the tournament thus far. However, a triple bogey at the difficult par-3 No. 7, prevented an ascent in the standings.

Likewise, Steve Sugimoto (San Diego, Calif.) slipped a couple of notches into a tie for 44th, one shot behind Vanhatalo at 7-over 149 after shooting a 74 of his own. The Aztec sophomore opened with back-to-back birdies at No. 11 and 12, before suffering consecutive bogeys on the 15th and 16th greens. The Rancho Bernardo High product got back to 1-under thanks to a successful drain at No. 2 and soon followed with five straight pars. However, double bogeys on his final two holes hastened his fall.

Conversely, freshman Youssef Guezzale (San Diego, Calif.) made the biggest gain for the Scarlet and Black, climbing 10 places into a tie for 56th at 10-over 152 after posting the Aztecs’ third 74 of the round. Despite logging five bogeys, including three straight on the back nine at holes 4-6, the La Jolla High alumnus still displayed some upward mobility thanks to birdies at No. 11, as well as his finishing green at No. 9.

In addition, Christian Banke (Danville, Calif.) made a modest one-step climb into a tie for 65th at 12-over 154 after recording a 76. The SDSU sophomore sank a team-high five birdies, including back-to-back drains at No. 5 and No. 6, the latter of which ranks as the third-most difficult hole of the week. However, Banke was saddled with inconsistency throughout, suffering four bogeys, a double and a triple, which thwarted his advance.

Elsewhere, freshman Leo Oyo (Tokyo, Japan) remains in a tie for 75th at 15-over 157 despite trimming three shots off Monday’s total with a 77, featuring a birdie on the par-4, 461-yard No. 18, which ranks as the second-toughest hole of the tournament.

LSU (-9) took over the lead in the team standings on Tuesday after shooting a collective 4-under 280, while defending national champion Oklahoma State (-4) dropped into the second spot, followed by Pepperdine (+2), UCLA (+3) and Oregon (+6).

The Prestige presented by Charles Schwab concludes on Wednesday with the final round, as San Diego State tees off alongside Iowa State and Notre Dame, starting once again on hole No. 10 at 8:36 a.m. The final round will also be streamed live by Golfweek starting at 10 a.m. with a link available on GoAztecs.com.