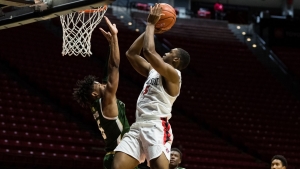 Utah State is unbeaten in Mountain West play for the first time in school history and off to its best start in any conference since opening the Western Athletic Conference 11-0 in the 2010-11 season.
Utah State scored a season-low 22 points and trailed by 10 at the break, but opened the second half with a 12-2 run to tie at 34-34. Utah State and San Diego State are the top two defensive teams in the Mountain West allowing 60.5 and 60.7 points per game, respectively.
Terrell Gomez had 16 points for the Aztecs (9-4, 3-3). Lamont Butler added 13 points and five steals. Jordan Schakel had 11 points.
The Aggies swept the Aztecs, having defeated San Diego State 57-45 on Thursday. San Diego State lost leading scorer Matt Mitchell to a knee injury Thursday, but an exam showed no ligament tears and Mitchell could return in two weeks.
Box
Postgame notes
Postgame quotes