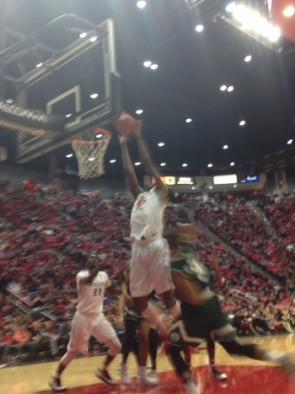 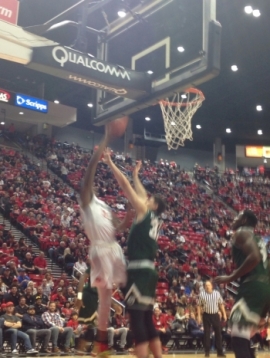 The first few minutes were hotly contested and almost no calls went SDSU’s way, but the Aztecs still managed to hop out in front thanks to an opening three by sophomore guard Jeremy Hemsley and another three by junior guard Trey Kell to give the Aztecs an 8-6 lead with 15 and a half minutes left.  Neither team had much of a scoring advantage and neither team hit many shots from the field in the first half.  Any break the Aztecs got was stifled by a tying basket by the Rams.  It was senior guard Dakarai Allen who extended the Aztecs to their longest lead of the half: eight, with persistence and driving to the hoop to end the Aztecs’ scoring drought and go on a 10-0 run to end the half.  SDSU went to the locker room up 33-23. 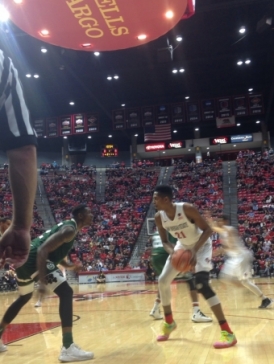 In the second half, the Aztecs were able to pull away thanks to a more aggressive attack and better defensive rebounding.  It also helped that a lot more calls went their way; Kell went to the charity stripe three times in the early second half.  When the Rams cut the lead to one, the (Malik) Pope wasn't fazed; the junior forward drilled home a three to put the Aztecs up by two with 10 and a half minutes left.  Pope quickly became the hero the Aztecs needed, dropping in a layup to bring SDSU to a four-point lead.  Allen added two more free throws and the Aztecs stayed out in front.  It was Kell and his many free throws, but also his stellar play in the field, that kept the Aztecs afloat, despite the Rams tying the game on a three by senior forward Emmanuel Omogbo.  The Rams charged back with good ball control and scoring and taking advantage of SDSU’s foul trouble, including a big three by redshirt senior guard Gian Clavell.  The Aztecs trailed by one with 28 seconds left.  Kell worked the foul call again and hit both his free throws, but the Rams hit a two at the other end to go up 78-77.  Hemsley’s buzzer beater attempt was no good and the Aztecs lost a thriller 78-77.  Despite the loss, four Aztecs reached double digit points:  Pope had an amazing 19-point game, Hemsley (17), Kell (15) and Allen (11). 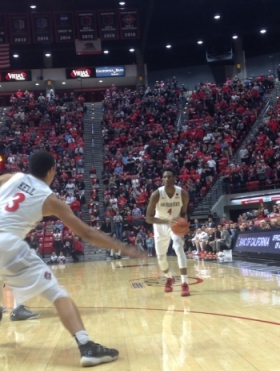 The Aztecs return to Steve Fisher Court on Tuesday night to face the Cowboys of Wyoming.  Tipoff is at 8:00 p.m. and you can watch the game on CBS Sports Network.