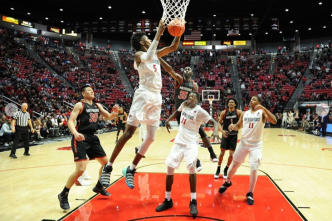 Devin Watson scored 14 and Hemsley 13 for SDSU, which appeared headed for its second straight home loss when it trailed 46-27 with 15:12 to go.

But the Aztecs suddenly found their game behind McDaniels and their senior backcourt of Hemsley and Watson. It also helped that CSUN redshirt freshman Lamine Diane -- who finished with 23 points and 14 rebounds -- drew his fourth foul and came out with just more than eight minutes to go and CSUN leading 51-44.

SDSU tied it at 51 on Watson's 3-pointer with just more than six minutes to go and the Aztecs took a 56-55 lead on Adam Seiko's 3-pointer with 3:34 left, their first lead since 7-6. The Matadors' last lead was 60-58 on Michael Ou's free throw with 2:12 left, before Hemsley hit a 3 to give the Aztecs the lead for good. SDSU closed out strong behind McDaniels' rebounding and got the final four points from Watson, on a layup and two free throws.

The Aztecs shot much better in the second half, going 53.3 percent overall and 60 percent from the 3-point line.