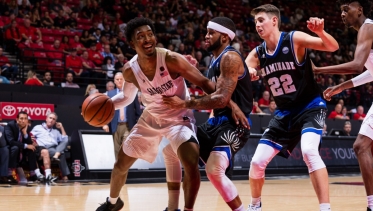 November 1, 2018 (San Diego) - In a tale of two halves, the San Diego State men's basketball team rallied for a 68-63 triumph over a pesky Chaminade squad in its lone exhibition game of the season Thursday night at Steve Fisher Court at Viejas Arena.

The Aztecs used an 18-0 run over a span of 8:42 through intermission to overcome a 37-26 deficit and win their 26th consecutive exhibition contest.

SDSU was paced by the tandem of Jordan Schakel and Matt Mitchell, who scored 16 points apiece, while Jalen McDaniels (14 pts.) and Jeremy Hemsley (11 pts.) surpassed the double-digit scoring plateau.

The Aztecs were outrebounded 35-32, including a 13-6 spread on the offensive glass, and connected on just 5-of-16 three-point field goals (31.3 percent). Despite those deficiencies, the Scarlet and Black sank 10 more free throws (15-5) and outscored the Silverswords in the paint 36-20 to help key its hard-fought victory.

SDSU tallied the first three baskets of the game, grabbing a 7-0 advantage on a Hemsley layup with four minutes elapsed. However, Chaminade methodically clawed its way back, taking a 16-15 lead on a triple by Tyler Cartaino at the 8:26 mark in the period.

The Aztecs responded with a Watson trey, but the Silverswords unleashed a 21-8 blitz over the next 6:18 to take their biggest lead of the night at 37-26 with 1:41 left before halftime. Chaminade drilled five three-pointers during that stretch, including three by Grant Dressler, who led all players with 18 points on the evening, while Andre Arissol capped the run with a three-ball of his.

However, SDSU closed with six straight points, including a layup by Mitchell with 22 seconds on the clock, which provided a harbinger for the second half.

The Aztecs maintained the momentum after the break, scoring 12 additional points, punctuated by a Mitchell layup and subsequent free throw with just under 14 minutes remaining, which put the hosts in front for good. SDSU capitalized on some cold shooting by Chaminade, which misfired on 10 straight field-goal attempts, including two right before intermission.

Erik Schieve ended the Silverswords' drought by banking in a layup at the 12:45 mark, but Schakel dialed up from long range on the ensuing possession to put the Aztecs up 47-39.

Chaminade would not go quietly, trimming the deficit to 56-53 on Dressler free throw with 5:17 to go. SDSU responded with a 9-4 spurt over the next two minutes and change, culminating with a thunderous dunk by McDaniels, which restored the Aztecs' eight-point bulge at 65-57.

Unfazed, the Silverswords remained within striking distance, narrowing the gap to 66-63 on a Dressler basket with 52 seconds remaining. However, SDSU survived the threat, as Mitchell hit two foul shots down the stretch, while a pair of Chaminade three-point attempts went awry.

In addition to his point production, McDaniels tied teammate Nolan Narain for game-high honors with seven rebounds, while Mitchell and Watson (four steals) dished out four assists each.

Conversely, Arissol was the only other Chaminade player to reach double figures, tossing in 13 points, while Roman Young and Nick Anderson hand out three assists each.

San Diego State opens its regular-season slate on Tuesday, Nov. 6 when it plays host to Arkansas-Pine Bluff at Viejas Arena. Opening tip is scheduled for 7 p.m.