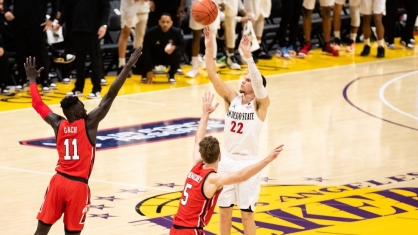 December 21, 2019 (Los Angeles) - Malachi Flynn and San Diego State head into Christmas off one of their most impressive wins of the season.

Flynn scored 16 points to lead the 20th-ranked Aztecs to a 80-52 victory over Utah on Satin the Basketball Hall of Fame Classic at Staples Center.
"Anytime we can play on a big stage and let people know how good we are we enjoy doing that," San Diego State coach Brian Dutcher said.
Yanni Wetzell and Nathan Mensah added 14 points apiece for the Aztecs (12-0), who remain one of the nation's four unbeaten teams. They are also off to the second-best start in program history.
San Diego State dominated inside with a 42-20 advantage in points in the paint. They led 29-19 at halftime with 18 of their points coming inside.
The Utes — who upset No. 6 Kentucky on Wednesday — came in shooting 50.2% from the field but were 15 of 48 on Saturday. That is their second worst-shooting game in Larry Krystkowiak's nine seasons as coach.
Timmy Allen led Utah (9-3) with 21 points. The Utes didn't make a field goal in the final 3:33.
"There's no question it was a challenge. It's like an extended Pac-12 road trip where you are playing against two ranked teams," said Krystkowiak about facing two straight top 25 teams. "We would have had to be real good to be in this game. It was a super physical game and you could see from our guys we could use some time in the weight room."
It is the second time this season the Aztecs have held a team under 32% from the field. Their shooting was much better as they went 31 of 63.
"We've very talented offensively but we are applying it on the defensive end. They made the next step defensively today," Dutcher said.
The Aztecs scored the first seven points and roared to a 15-2 lead. The Utes did not get on the scoreboard until the 16:16 mark and trailed by double digits when Wetzell hit a 3-pointer to make it 12-2 with 15:19 remaining.
San Diego State's largest lead in the first half was 14. It was up 29-19 at halftime and extended it to 34 during the final minute.
TIP INS
San Diego State joins Auburn, Duquesne and Liberty as the remaining unbeaten teams. ... Allen also had six rebounds, marking the eighth game he has led the Utes in both scoring and rebounding. ... Wetzell led the Aztecs with six boards. ... San Diego State has won seven of its last eight against Utah.
BIG PICTURE
This is the Aztecs'' third neutral-court victory over a major conference opponent this season. They beat Creighton and Iowa in the Las Vegas Invitational.
UP NEXT
San Diego State: Hosts Cal Poly on Dec. 28.
Box
Postgame notes
Postgame quotes