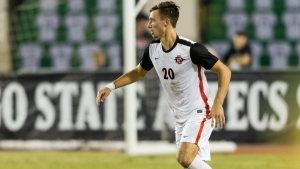 “It feels amazing to have this opportunity with such a great club, and also knowing that all the sacrifice I put into this sport is paying off,” Berkolds said. “I’m going to work hard every day to show what I have to offer.”

Berkolds was a stalwart for the Aztecs’ backline in 2018. He started all 18 matches on defense for SDSU and was never subbed out.

“It was great to have Aleks return for his senior year and impact the Pac-12 in a big way,” Head Coach Lev Kirshner said. “He falls in line with a number of prominent Aztecs who have been drafted and we wish him the best of luck as he continues to chase his dream.”

Berkolds joins Jamel Wallace (2009) and Daniel Steres (2012) as Aztec defenders to be drafted by the Sounders. He is the first Aztec to be drafted since Jordan Ongaro was selected by the Montreal Impact in 2014. SDSU has now had six players taken in the MLS SuperDraft since 2009.

The Sounders open training camp next week and play their season opener against FC Cincinnati on March 2.

It was a busy day for the Aztecs as Damian German (Phoenix, Ariz.) was also signed to a homegrown contract by Real Salt Lake. He will play for their second team, the Real Monarchs, next season.

German came to SDSU for the 2018 season after spending three years at Grand Canyon. He immediately became one of the Aztecs’ top playmakers and led the team in shots and was second in goals (5) and points (11). After the year, he was named to the all-Pac-12 first team and to the all-far West region third team.