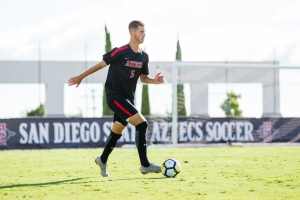 November 1, 2018 (San Diego) - The Aztec men’s soccer team fell to No. 6 Stanford 2-0 at the SDSU Sports Deck Thursday evening. The Cardinal scored goals in the 48th and 72nd minute to give the Aztecs’ their third straight loss.

“This game was kind of the story of our season,” Head Coach Lev Kirshner said. “We had a great first half and a quality second half that just didn’t go our way. We were right there with the number six team in the country, but we couldn’t get the result we hoped for.”

The two best scoring chances for the Aztecs came from Damian German. In the 37th minute, he dribbled down the left wing and tried to sneak a low shot inside the far post, but Stanford’s Andrew Thomas got a finger on it and then the Cardinal defense booted it away.

German had another opportunity in the 66th minute when he juked a Cardinal defender to set himself up for a good look from the top of the box, but he got under the ball and sailed it high.

“I cut the defender and then at the last second the ball popped up and it threw my whole shot off,” Damian German said after the match.

Stanford’s first goal came in the 48th minute after a cross from Will Richmond was finished with a one-timer from Charlie Wehan. Wehan netted another goal later in the half, but was whistled for being offsides.

Stanford scored an insurance goal off a Tanner Beason penalty kick in the 72nd minute after Miles Stray was whistled for a foul in the box.

With Max Watkin sidelined with an injury, senior goalkeeper Cameron Hogg returned to the pitch and made a couple of fantastic saves. The first came in the 15th minute when he made a diving stop to thwart a goal from Amir Bashti. Hogg spoiled another opportunity from Bashti in the 80th minute, tipping the ball out to force a corner on a rocket shot from 20 yards out.

MAN OF THE MATCH – Pablo Pelaez

“Pablo was controlling the tempo for us and did a great job leading the group tonight. He did a lot of things that don’t show up on a scoresheet.” Head Coach Lev Kirshner

The Aztecs held a 6-3 advantage in shots in the first half.

The score has been 0-0 at halftime in all eight of the Aztecs’ Pac-12 matches.

The Aztecs have yet to allow a Pac-12 opponent to attempt more than 11 shots.

“We don’t feel that our current record is indicative of what our team is, but we need to learn how to win games instead of just being right there in the mix of it.” Head Coach Lev Kirshner

The Aztecs host Cal for their final home game Sunday at 4:30 p.m.