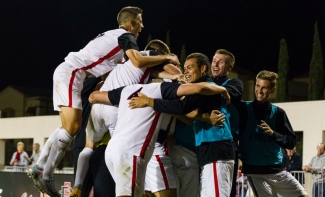 “We have a line in our program that every match is important but some are just a little more meaningful,” said head coach Lev Kirshner. “It’s great to celebrate 50 years with some of the biggest names in our storied program. What the guys did here tonight in honoring that with a victory was first-class.”

After the Aztecs recognized members of the program’s All-50 team, SDSU was quick to give the notable alumni in attendance something to cheer about, as freshman Tevenn Roux found the back of the net for his first collegiate goal in the third minute.

The Aztecs went into the break with a 1-0 advantage, while the teams were tied in shots at 5-5. During halftime, the Aztecs retired the jerseys of eight well-decorated alumni, including SDSU’s first-ever All-American Peter Goossens, the program’s leading goal scorer Kyle Whittemore, two-time All-American and former US National Team member Kevin Crow, and two-time All-American goalkeeper Tally Hall, all of whom were in attendance Saturday night.

Roux’s first-half goal was all the offense SDSU needed, however, Jeroen Meefout capitalized on a pair of second-half offensive chances to put the game out of reach. After Ilai Shvika found an open Jamal Bernarndez inside the box, Bernardez dished the ball to Meefout who was located directly in front of the net and hit a bouncing chopper into the top right corner of the net in the 65th minute.

23 minutes later with time winding down, Meefout made a break down the left side of the field and pushed one past Broncos goalkeeper Seamus Hudnut in the bottom right corner of the net in the 88th minute.

The Aztecs outshot Santa Clara 10-9 and had more of their chances on target at 5-4. Corner kick opportunities were even at 5-5.

MAN OF THE MATCH: Jeroen Meefout was named Man of the Match after recording his team-high fifth and sixth goals of the season Saturday night. Meefout, who converted on both of his shot attempts to bring his season goal total to six, is now tied for the most amount of goals by a SDSU player since the 2014 season. Meefout is tied for second in the Pac-12 with six goals and fourth in the league with 15 points.

The Aztecs next face Washington on Thursday at 7:00 p.m.  ECM will have live coverage of this game, so follow @ECMagSports on Twitter for live updates.