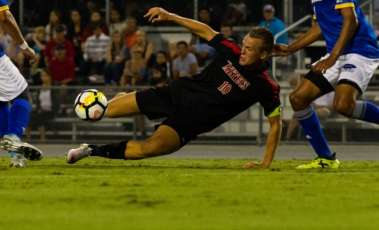 To get the scoring started, Meefout collected a Chris Scatterday throw in inside the offensive third in the 17th minute, and was able to keep his distance from the UTRGV backline to get off a clean shot and put one past Vaquero goalkeeper Andy Rios for a 1-0 lead.

The Aztecs came out with a continued sense of urgency in the second half, needing just 1:06 after the halftime break for Meefout collect his second goal of the match. After receiving a pass from Dallin Cutler, Meefout took a shot from the top of the box and tucked it inside the far right corner of the net to give the Netherlands native his team-leading fourth goal of the season.

The Aztec defense allowed just two of UTRGV’s 14 shots to be on target while doing a superb job on trapping UTRGV’s forwards, forcing five offsides calls on the Vaquero attack. Adam Allmaras collected two saves on the evening and recorded his first clean sheet of his senior campaign.

SDSU, which started its all-time series with UTRGV in 2015, maintains a perfect record against the Vaqueros at 3-0 and have outscored UTRGV 8-1 in those three contests. The Aztecs also extend their winning streak to six games when playing Texas-based opponents.

The Aztecs remain in Edinburg, Texas and will take on Incarnate Word on Sunday at 5:00 p.m. PT to conclude the team’s early season non-conference schedule.