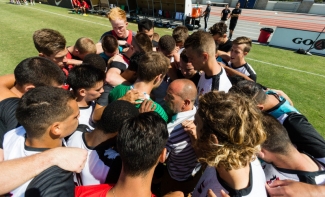 November 5, 2017 (Stanford) - The San Diego State men’s soccer team wrapped up its 2017 road schedule at No. 4 Stanford on Sunday evening and fell to the Cardinal 4-0 at Cagan Stadium.

Stanford’s scoring was split between a pair of first-half goals and two insurance scores in the second half. The Cardinal posted 10 of its 12 shots on frame in the first half, creating a busy 45 minutes for SDSU goalkeeper Adam Allmaras, who recorded an impressive eight saves before the halftime break.

In his first action of the season, Cameron Hogg took over goalkeeping duties in the 79th minute, and held Stanford scoreless for the final 11:33 of the match. Hogg recorded one save in his 2017 debut.

The Aztecs wrap up its 2017 campaign next weekend at home, welcoming UCLA for a 7:00 p.m. square-off next Saturday, Nov. 11. The Aztecs will also host Senior Day and honor the team's six seniors in a pregame ceremony.