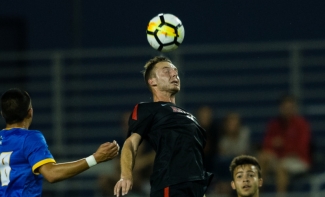 September 16, 2017 (San Diego) - The San Diego State men’s soccer team fell to Cal Poly 1-0 on Friday night at the SDSU Sports Deck to cap a season-long four-game homestand. The Aztecs now sit at 2-4-0 on the season, while the win for Cal Poly improves the Mustangs record to an identical 2-4-0.

“I was very proud of our group’s play tonight,” said head coach Lev Kirshner. “We competed and were selfless on the ball. It was a beautifully played game by us with one momentary lapse. We won’t lose many of those games if we continue to perform like this.”

Cal Poly posted the lone goal of the match in the 14th minute, using a long throw in from Sean Goode in the offensive third to find an open Adam Olsen from close range.

SDSU nearly recorded a game-tying score with Winston Sorhaitz taking a shot from close range, but Mustang goalkeeper Simon Boehme made a highlight-reel save to preserve Cal Poly’s late 1-0 lead.

Despite the loss, the Aztecs held significant advantages in shots (15-8) and corner kicks (12-3). The Aztecs presented a strong amount of offensive pressure in the second half, outshooting the Mustangs 8-4 in the final 45 minutes.

The Aztecs had a trio of players post a game-high four shots, including Pablo Pelaez, Thom Van den Berg, and Jeroen Meefout. Van den Berg was one of just two players in the contest with two or more shots on goal.

The Aztecs head to Edinburg, Texas, next weekend, to face Texas-Rio Grande Valley on Friday, Sept. 22 at 7:00 p.m., and Incarnate Word on Sunday, Sept. 24 at 7:00 p.m. to conclude nonconference play.

MAN OF THE MATCH: Jeroen Meefout was named Man of the Match, contributing a game-high four shots and creating numerous offensive chances in the offensive third. Meefout leads the Aztecs with two goals and two assists this season.