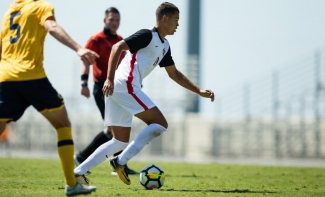 The Beavers headed into the halftime break with a 1-0 lead in thanks to a 29th minute tally by Don Tchilao. 13:58 after play resumed for the second half, OSU extended that lead with Jordan Jones’ third goal of the year.

AJ Vergara led the Aztecs in both shots, with four, and shots on goal, with two.

One of the Aztecs best scoring chances came in the 84th minute, as Tevenn Roux’s chance at goal ricocheted off the post and out of danger. Less than three minutes later, the Aztecs presented another strong offensive threat as Dallin Cutler’s shot was on target, but cleared out of harm’s way by an OSU defender.

SDSU posted a 16-12 shot advantage and showed a high sense of urgency in the game’s final nine minutes, taking six shots for a chance at a late comeback. Each team recorded five shots on goal, while Adam Allmaras recorded three saves in net for the Aztecs.