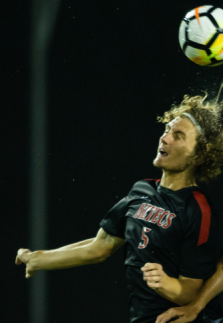 Utah Valley’s Gui Leme posted the only goal of the match, capitalizing on an unassisted opportunity by pushing a shot into the bottom left corner of the net for a 1-0 Wolverines advantage.

“I’m proud that we came out with a much better performance in the second half and certainly after Friday night, three games in seven days is never easy,” said head coach Lev Kirshner. “The last 45 minutes and what we saw against UC Santa Barbara is more indicative of what this program is built on. We’re just not doing enough of the little things right now.”

SDSU had one of its best offensive chances just 5:37 into the game, as Pablo Pelaez rocketed a shot well beyond the 18-yard box, but was stopped by goalkeeper Rubio Elliott, who made a full-extension save on a chance that would have cruised just inside the crossbar.

Despite being down 1-0 at halftime, SDSU limited Utah Valley to just three first half shots and had a 5-1 advantage in corner kicks. For the second half, the two teams were even in shots, at 5-5, and corner kicks, at 2-2.

Looking to make a late comeback, the Aztecs were able to keep the contest a one-goal deficit thanks to an impressive save from Adam Allmaras in the 60th minute, as the redshirt senior stopped a shot from Utah Valley’s Austin Buxton from point-blank range to maintain the 1-0 score. Allmaras posted two saves in his Sunday night outing.

The Aztecs wrap up a season-long four-game homestand next weekend, welcoming Cal Poly to the SDSU Sports Deck for a Saturday night affair at 7:00 p.m.  ECM will have full coverage of this game, which you can see by following @ECMagSports on Twitter for live updates.

MAN OF THE MATCH: Kyle Adams earned Man of the Match honors, being a key part of numerous defensive stops throughout the match. The junior from New Zealand was one of five SDSU players to play all 90 minutes of action. With his effort over SDSU’s two games in the Courtyard Marriott San Diego Central Tournament, Adams earned All-Tournament team honors.