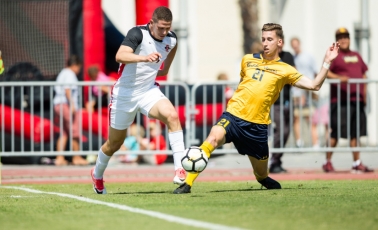 October 1, 2017 (San Diego) - The San Diego State men’s soccer team fell victim to a California goal with 11 seconds remaining in regulation after Cal’s set-piece opportunity from just outside the 18-yard box was originally ricocheted off the left post but collected by Shinya Kadono and put into the back of the net for a 1-0 Golden Bears victory.

The Aztecs had a late goal-scoring opportunity of their own in the 83rd minute, as a picture-perfect 50-yard pass from Ilai Shvika down the center of the field found an open Jeroen Meefout. Meefout was ultimately denied by Cal goalkeeper Drake Callendar on a sliding save on a shot that was heading towards the bottom of the net.

Play throughout the match was fairly even, as Cal’s nine shots just edged out SDSU’s eight. San Diego State recorded a 5-0 advantage in corner kicks and a 4-2 edge in shots on goal. DJ Villegas, Emil Kjellker and Spencer Madden all recorded one shot on goal each to help set up SDSU’s offensive chances.

The Aztecs look to rebound next weekend, heading to Washington for a Thursday night contest at 7:00 p.m. PT. Following the game at Washington, SDSU will make the 261-mile trip south to Oregon State for a Sunday square-off at 11:00 a.m. PT.