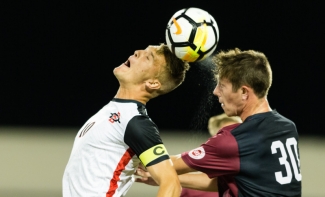 Oregon State netted both of the first two goals of the game, with scores in the 16th and 42nd minute. The Aztecs, however, went in to halftime with a bit of momentum, as Meefout curled a free kick perfectly inside the post for his team-best seventh goal of the year.

Meefout, now with seven goals and three assists during his senior campaign, is tied for the most goals by an Aztec since the start of the 2014 season.
OSU came out of the halftime break with a persistent offensive attack, and used a 57th and 62nd minute goal to provide a cushion in the second half. The Aztecs chipped away at that lead with freshman Tevenn Roux’s second goal of the year, as Winston Sorhaitz forced out Beaver goalkeeper Gage Rogers, and dished the ball to Roux who made it 4-2 with a converted shot inside the left post.
Coming off the bench, goalkeeper Max Watkin played a scoreless final 20 minutes, as the SDSU backline clamped down during the late stages and did not allow a shot on goal in the final 20 minutes.
The Aztecs had a slim disadvantage in shots on goal, at 6-5. SDSU applied a strong amount of offensive pressure throughout the match, registering five corner kicks in comparison to OSU’s one.
SDSU makes a trip to northern California next week, facing California on Thursday, Nov. 2, and Stanford on Sunday, Nov. 5. The Aztecs conclude the regular season at home against UCLA on Saturday, Nov. 11.
Box