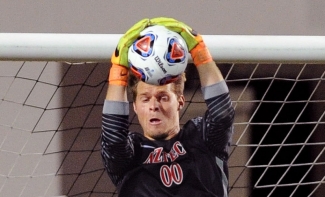 November 2, 2017 (Berkeley) - Despite a standout performance from senior goalkeeper Adam Allmaras, the San Diego State men’s soccer team started its final road weekend of the season with a 1-0 loss at California on Thursday afternoon. The Aztecs fall to 5-12 (0-8 Pac-12), while Cal, which is receiving votes in the national rankings by United Soccer Coaches, improves to 10-5 (5-3 Pac-12).

The teams went into the halftime break scoreless, largely in thanks to Allmaras, who recorded six of his eight saves in the first 45 minutes. Cal applied heavy amounts of offensive pressure, however, under Allmaras’ direction, SDSU kept the Golden Bears scoreless despite 15 first-half shots.

The Golden Bears broke through in the 70th minute, using Spencer Held’s second goal of the year to record the game’s only score. After Cal collected the first lead of the game, the backline of the Golden Bears halted any chance of a late comeback for the Aztecs, as SDSU had only one second-half shot.

Jeroen Meefout led the Aztec attack, recording a team-high three shots with two being on frame. While the Golden Bears outshot the Aztecs 26-7, the margin in corner kicks was significantly closer, with SDSU trailing 6-5 in opportunities.

The Aztecs conclude its 2017 road schedule on Sunday, facing No. 4 Stanford on Sunday at 5:00 p.m. The game will air live on the Pac-12 Network.