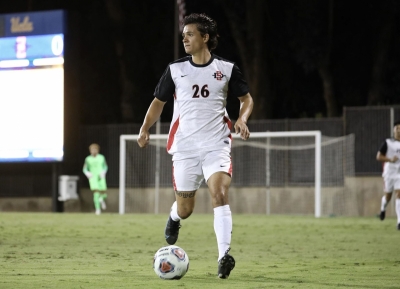 Oregon State’s goal was a 30-yard strike from Javier Armas in the 51st minute.

“It’s a tough result. I thought we played well enough and executed the tactics we wanted to, and they scored on a wonder strike,” Head coach Ryan Hopkins said after the match. “That’s how it goes sometimes when you play the number two team in the country. They can beat you a 100 different ways and I think we shut down about 99 of those ways, but they found a way to get the one. I’m proud of the boys. They stuck together and we had some good chances.”

SDSU played the Beavers tough in the first half with OSU only having a 3-2 shot advantage, but the Beavers outshot the Aztecs 14-2 in the second half.

Outside of their goal in the 51st minute, OSU’s best opportunity came in the 60th minute when Jacob Castro made a diving save to stop a Jordan Gerbet shot.

Oregon State outshot SDSU 14-2 in the second half.