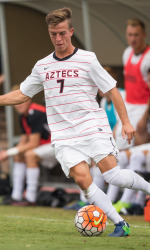 
Trailing 2-0, SDSU broke its scoring drought in the 77th minute when redshirt senior Travis Nicklaw headed a shot past OSU keeper Ryan Vincent into the right side of the net for his team-leading fifth goal of the season following a corner kick by redshirt junior Dallin Cutler.

A similar scenario unfolded shortly thereafter as Cutler once again lined up for a corner kick. This time, however, it was redshirt sophomore Greg Norris who came up with the clutch tally, battling through heavy traffic to knock another header past Vincent for the equalizer in the 85th minute.

With momentum on their side, the Aztecs looked to complete the comeback in overtime. However, Vincent made two saves on a pair of blasts by Norris in the first four minutes of the extra period.

Nearly four minutes later, the Beavers stunned the visitors with the game-winner as Eric Diaz delivered a cross from the left side to Jordan Jones who managed to punch the ball into the back of the net on a bicycle kick from close range for his second goal of the afternoon.

After a scoreless first half, OSU got on the board first when Matt Arbogast one-timed a shot from just inside the box after a couple of short feeds by Nathan Braaten and Jaime Miralles in the 50th minute. The Beavers then extended their advantage to 2-0 in the 56th minute after Diaz threaded a long pass to Jones, who dribbled once before curling in a shot from the near right wing.

For the match, SDSU maintained a 17-13 shot advantage, including an 8-5 spread in those directed on goal. In addition, the Aztecs owned a 9-5 edge on corner kicks.

Individually, nine players attempted a shot for SDSU, including three apiece by Norris, Nicklaw and redshirt freshman Pablo Pelaez. Aztec gaolkeeper Adam Allmaras finished with two saves on the day, while his counterpart Vincent came up with six stops overall.

San Diego State continues its road swing on Sunday, Nov. 6, when it battles No. 11/10 Washington at Husky Soccer Field in Seattle, Wash. Match time is set for 5 p.m. PT.