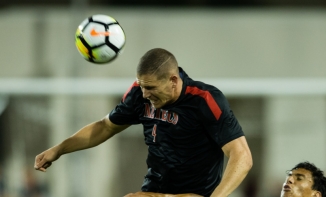 Despite UCLA scoring a late 83rd-minute goal to take a 1-0 lead, the Aztecs would not go down without a fight and were ultimately rewarded for their efforts in thanks to a highlight-reel goal by Ilai Shvika with only two seconds remaining in regulation. Shvika initially collected a Jeroen Meefout cross off his chest, and off the volley, the Israel native smashed home a one-timer into the far-right corner of the net to pull off the heroics and force the match into overtime.

Even with that momentum carrying into overtime, the Aztecs, unfortunately, were upended after a 95th-minute goal by UCLA’s Eric Iloski. The goal came on the first shot for either team in extra time.

Adam Allmaras recorded a strong showing in goal for the Aztecs, recording five saves in the 95 minutes of action.

The Aztecs presented a diverse offensive attack in the match, with six different players recording at least one shot. Dallin Cutler, Meefout, and Shvika each posted two shots each to lead SDSU.

The Aztecs now look towards their first home match in nearly three weeks on Saturday, hosting Santa Clara at 7:00 p.m. The game will be in conjunction with the program’s 50th-anniversary celebration, where SDSU will honor numerous well-decorated alumni both pregame and during halftime. Admission for the SDSU-Santa Clara contest is free.