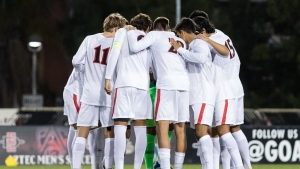 All four goals were scored in the first half

All four goals came in the first half. After the Cardinal went up top, the Aztecs scored the equalizer but then saw Stanford score two more before the half.

The Aztecs’ best early opportunity came on a Tristan Weber free kick from deep in the 16th minute then nearly snuck inside the crossbar before Cardinal goalkeeper tipped it over.

Stanford struck first in the 23rd minute on a set piece, scoring on a free kick from the right sideline that skipped through a crowded box before finding Gabe Segal’s foot.

SDSU got on the board in the 32nd minute when Andre Ochoa got a steal from a Cardinal defender to set up a one-on-one with the keeper and finished in the lower left corner.

Shortly after that, Aztec keeper Tetsuya Kadono kept it tied by saving a penalty kick. However, Stanford would score twice more before the halftime break. First in 36th minute on a cross sent into the box then headed towards the goal and finished in the lower right corner from about 12 yards out.

Right before the half, Stanford’s Charlie Wehan scored from the end line sneaking the ball inside the far post.

Stanford ended up with 18 shots to the Aztecs’ six. Kadono and the SDSU defense faced eight shots in the second half but held strong and didn’t allow the Cardinal to score.

This was just the second time SDSU has lost by more than one goal.

The Aztecs will be back in the Bay Area next weekend when they play at Cal Saturday at 7 p.m.