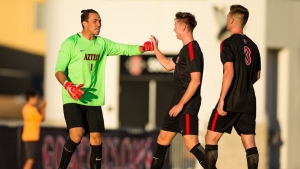 August 30, 2019 (San Diego) - The Aztec men’s soccer team fell 3-2 to San Diego in their season opener. Playing in front of 1,687 raucous fans, the Aztecs held leads of 1-0 and 2-1 but saw Torero forward Miguel Berry score two second half goals in a five-minute span to secure the win for USD.

“I was excited to see the San Diego community come out and support the game of soccer,” head coach Lev Kirshner said after the match. “It was a great crowd but obviously we are disappointed we didn’t put a better foot forward in the match. All credit to USD for making it difficult on us.”

The Aztecs jumped out to an early lead after senior captain Pablo Pelaez converted a penalty kick in the eighth minute. The Toreros were whistled for fouling Tevenn Roux in the box after he took a lead pass from Laukoa Santos.

The Toreros tied the match in the 24th minute when Ross Meldrum finished a Miguel Berry assist from the right wing, sneaking the ball into the upper right corner.

SDSU quickly responded and retook the lead in the 29th minute. Keegan Kelly sent a corner deep, which Tevenn Roux headed back in towards the box to Tristan Weber, who collected and turned to fire a strike inside the near post.

The momentum shifted in the second frame and the Toreros outshot the Aztecs 7-1. Berry’s first goal came in the 65thminute when he showed off his speed and dribbled through multiple Aztec defenders before finishing. Berry scored again in the 70th minute from the left wing.

“Our guys are going to need to bounce back and regroup so we can take care of business at UNLV on Monday.” --Head Coach Lev Kirshner

The Aztecs are now 14-7-2 all-time against the Toreros.

The Aztecs play at UNLV Monday evening at 8:00 p.m. The match will be streamed on the WAC Digital Network.