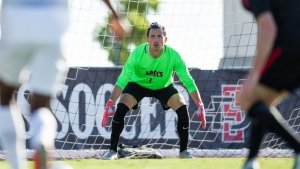 Washington outshot the Aztecs 14-10 while putting half their shots on goal.

The Huskies first goal came after a cross from the right end line was cleared by an Aztec defender right to the foot of Lucas Meek, who scored on a one-touch inside the far post.

SDSU had more shots and more shots on goal than UW in the first 20 minutes, but the Huskies would outshoot the Aztecs 6-2 in the first half’s final 25 minutes and consistently were attacking the SDSU defense.

In the 25th minute, Aztec goalkeeper Max Watkin made a great save on a Meek shot after he received a flick inside the box.

Just a few minutes later, Bodily had a breakaway and chipped the ball towards an empty net after Watkin charged, but the ball bounced just wide.

The Aztecs’ best look came with must 10 seconds remaining in the match when Hunter George had a strike from 20 yards out blocked by a saving dive by the UW keeper.

Max Watkin (2-2-1) finished the match with five saves while his counterpart Sam Fowler earned the shutout and collected four saves.

Half of Washington’s 14 shots were on frame.

This was the first match this season that the Aztecs have been shutout.

SDSU continues their Pacific Northwest road trip Sunday when they play at Oregon State at 2 p.m.