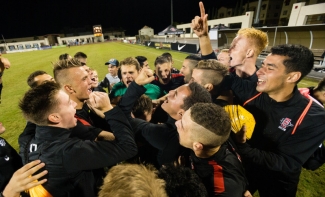 Meefout, who earned a Second Team nod a season after being named an Honorable Mention selection, finished second in the Pac-12 with eight goals and third in the league with 21 points. With 16 career goals, Meefout finished his Aztec career fourth among Aztecs since 2000, and his eight goals rank as the most by an Aztec since the 2013 season. The Netherlands national is just the second Aztec to record both five goals and five assists in a single season since 2000.

Meefout recorded three games with four points, including a season-ending performance against Pac-12 rival UCLA featuring a goal and a pair of assists. The Aztecs went 5-3 in games which Meefout recorded at least one point.

Sorhaitz, another senior forward for the Aztecs, earned Honorable Mention recognition after posting three goals and one assist during the 2017 campaign. In SDSU’s home opener, Sorhaitz recorded his first career brace to lift the Aztecs over UC Santa Barbara, 3-1. Sorhaitz also concluded the season registering a point in two of his final four games, tallying an assist against Oregon State on Oct. 29 and notching his third goal of the year in the season finale against UCLA on Nov. 11.