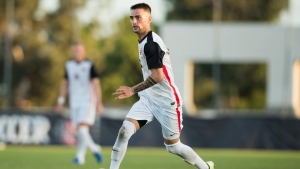 Santa Clara scored in the 40th minute but then saw their goalkeeper be issued a red card in the 64th minute. The Aztecs tied the match up in the 76th minute on a Keegan Kelly header and had a flurry of opportunities in the final minutes of regulation and extra time but couldn’t find the back of the net.

SDSU finished with 26 shots to Santa Clara’s 12 and the Aztecs had 10 shots on goal after the Broncos went down to 10 men.

The Aztecs had six shots and four on frame in the game’s first five minutes. They seemed to catch a break in the 15th minute when Santa Clara was whistled for a foul in the box to set up a PK, but Pablo Pelaez knocked his kick off the crossbar despite having the Bronco goalkeeper leaning the opposite way.

SDSU would have another opportunity just a few minutes later. Pelaez nearly finished a cross but the SCU goalkeeper made a nice deflection which set up another look from Keegan Kelly, whose shot also ended up being collected by the Bronco keeper.

The Broncos scored their lone goal off a free kick in the 40th minute. In what was essentially a corner kick, Terrell Smith finished a cross inside the six-yard box. This was Santa Clara’s first shot on goal of the night.

The Aztecs caught a break in the 64th minute when Bronco goalkeeper Guillermo Badenes Mecho received a red car. Laukoa Santos drew the foul after Mecho swiped at his feet with a clear scoring opportunity ahead.

The Aztecs peppered the Bronco defense with shots for the remainder of the match.  After two close calls from Austin Wehner and Tristan Weber, Keegan Kelly got SDSU on the board with a header off a Weber cross in the 76th minute.

After Santa Clara went down to 10 men, the Aztecs had nine shots on goal in the following 30 minutes. Their best opportunity came in the 87th minute when a Keegan Kelly shot was tipped up and over the cross bar.

SDSU had another great look in the 100th minute when Wehner received an open look header in the box.

The Aztecs outshot the Broncos 19-6 in the second half and extra time.

Santa Clara and SDSU have played in each of the last three seasons. The Aztecs are 1-1-1 in those meetings

The Aztecs begin Pac-12 play next week with matches at Washington and Oregon State. Both matches will be broadcast on the Pac-12 Network.