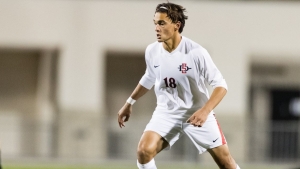 The Aztecs didn't allow a shot until the 48th minute

The Aztecs held Stanford without a shot for the first 47 minutes and only allowed three shots on goal all evening against a Cardinal team that had outscored its opponents 12-1 in their three matches entering the night.

“It was a heartbreaker,” Head coach Ryan Hopkins said. “I told the guys after the game that the path towards success isn’t always straight and there are going to be bumps in the road. We’re going to face adversity and that's certainly what we faced in the first two games. These are some painful growing lessons.”

SDSU held a 4-0 shot advantage in the first half getting two shots on frame and limiting the Cardinal opportunities.

In the second half, Stanford outshot the Aztecs 9-2, although they only had a couple dangerous opportunities, one being the game-winner.

“A team like Stanford is accustomed to wearing their teams down,” defender Kyle Colonna said after the match. “I think that our energy definitely dropped a little bit [in the second half].”

Less than 30 seconds into extra time, Stanford’s Charlie Wehan caught the attention of multiple Aztec defenders near the top of the box and he was able to slip the ball to a streaking Gabe Segal on the right wing who snuck the ball inside the near post for the game-winner.

The Aztecs didn’t allow a Cardinal shot attempt until the 48th minute.

Seven Aztecs played the full 91 minutes, six of which were underclassmen.

“I loved our togetherness and the willingness to run and tackle and cover for each other. I would have loved to have fans tonight. I think this place would have been rocking and rolling which I think this group really feeds off.” –Head Coach Ryan Hopkins

The Aztecs play at Washington next Saturday at 1 p.m.