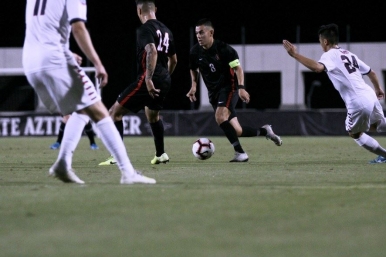 Pablo Pelaez had a goal and an assist

SDSU outshot Brown 19-15 and scored one goal in each half. The Aztecs had five shots and three on goal in the first 15 minutes of the game.

Pablo Pelaez had a shot go off the crossbar in the third minute. SDSU got on the board in the 39th minute when Hunter George headed in a Pablo Pelaez cross from the left wing.

At the half, the Aztecs had nine shots, putting six on frame. In the first few minutes of the second half, SDSU continued to put pressure on the Bears. Blake Bowen used his speed to create a long-range opportunity that missed just wide in the 50th minute.

In the 52nd minute, the Aztecs added to their lead. Blake Bowen took advantage of open space and dribbled all the way into the box. After his shot, the ball bounced around the crowded box until Pelaez tapped it in.

Goalkeeper Max Watkin finished the game with a career-high nine saves, including a couple of highlight reel quality.

Both Hunter George and Pablo Pelaez have four goals on the year, tied for the team-lead.

This is SDSU’s first shutout of the year and Watkin’s third of his career.

The Aztecs return to Southern California and continue their Pac-12 schedule when they play at UCLA next Sunday evening.