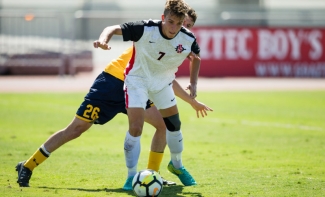 Washington opened the game with a 5th minute goal for a 1-0 lead. The Aztecs held the Huskies scoreless for the remainder of the half, partly in thanks to a pair of Adam Allmaras saves in the remaining 40 minutes of the first frame.

The Huskies added a pair of goals in the second half, recording a score in the 58th minute before capping the scoring with a tally in the 75th minute.

Dallin Cutler led the Aztecs with a pair of shots, including one on target. Allmaras concluded his night with four saves in net. Washington outshot SDSU, 14-6, while corner kicks were even at 4-4.

The loss for SDSU ends a three-match unbeaten streak when playing Washington. The Aztecs continue Pac-12 action on Sunday, playing at Oregon State at 11:00 a.m.