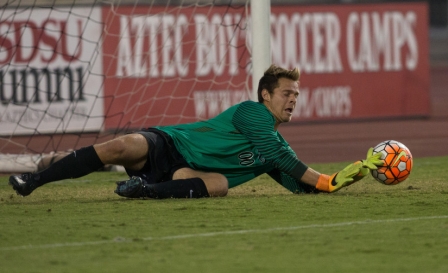 “We faced a very good and motivated team on their home opener,” said head coach Lev Kirshner. “They were difficult to breakdown and willed the game-winner as our boys battled hard to clear the ball multiple times.”

In a closely-fought defensive contest, San Diego State saw its best offensive chance in the 35th minute, with a Jeroen Meefout shot ricocheting off the post and eventually getting cleared out of the offensive zone.

Adam Allmaras posted two impressive saves in the first half, including one off a free kick from Tyler Mitchiner in the 14th minute, and a stop on another free kick by Zeenan O’Shea in the 29th minute.

Army West Point went into the halftime break with a slim 6-5 advantage in shots. The second half was more of a defensive battle, however, as only three shots were taken between the two teams in the final 45 minutes of regulation. Meefout and Pablo Pelaez contributed a team-high three shots each.

The Black Knights broke the scoreless tie with just 43 seconds remaining in the first overtime period. After a pair of Army West Point shots were deflected off the SDSU backline, Epps was able to collect a loose ball and push it past Allmaras from close-range.

“We gave a great physical and defensive effort but needed a better performance on the ball, which made the game a lot more difficult for us,” stated Kirshner.

The Aztecs will return to Clinton Field on Army West Point’s campus Sunday to take on Vermont. First whistle between the Aztecs and Catamounts is scheduled for 12:00 p.m. ET.

MAN OF THE MATCH: Kyle Adams was named man of the match after playing all 99 minutes on the backline and being the centerpiece of several defensive stops for the Aztecs.