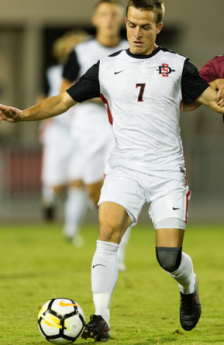 “We had the two best chances of the game tonight, so if you tuck one of those away, it’s a different result,” stated head coach Lev Kirshner. “We did a lot of very good things on the field to try and get a result, we just beat ourselves on the goal.”

SDSU had three prime offensive chances in the first half, including a try by Jeroen Meefout in the 16th minute. Meefout was denied by UW goalkeeper Saif Kerawala on a diving save, and just over three and a half minutes later, Dallin Cutler ripped a long-distance shot but had it sail just inches above the crossbar.

Later in the half UW’s Kerawala continued to carry the Huskies, making another impressive diving save – this time with only 25 seconds remaining in the first frame on a Meefout penalty kick.

Scott Menzies provided the game with its lone goal of the match, as a breakaway by Elijah Rice in the 39th minute created an offensive opportunity for the Huskies. After Rice’s initial run was broken up by the SDSU backline, Rice recollected the ball and dished it to Menzies, who cashed in for his team-leading seventh goal of the year.

The Aztecs recorded four shots in the first half, but were stifled by the Washington backline and held without a shot in the second half. UW had advantages in both shots at 16-4 and corner kicks at 9-2.

MAN OF THE MATCH: Adam Allmaras was named Man of the Match after making three saves in the Aztec net. The senior goalkeeper posted his eighth game of the season allowing one or zero goals.