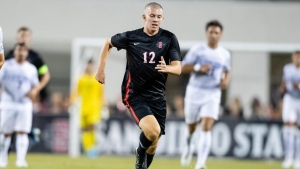 SDSU got on the board first with a goal in the final seconds of the first half, but things went sour quickly in the opening minutes of the second frame. The Beavers tied the match on a PK in the 48th minute and then Aztec defender Miles Stray was whistled for his second yellow card of the match, forcing the Aztecs to play the rest of the match with 10 men. The Beavers immediately capitalized and scored on the ensuing free kick in the 50th minute.

The Beavers outshot SDSU 14-7 in the match and held a 10-4 advantage in the second half.

SDSU’s lone goal came at the feet of a pair of substitutes. After a failed clearance by an OSU defender, Laukoa Santos sent a cross into the Hunter George who was able to finish for his third goal of the season.

The Beavers’ first goal came after Adam Vargas was whistled for a push in the back in the box a corner kick. That resulted in a PK for Sofiane Djeffal. SDSU keeper Max Watkin made the correct read and got a hand on the ball, but it skimmed off his fingertips and inside the right post.

Less than two minutes later, defender Miles Stray was whistled for his second yellow card on a controversial call that also resulted with a caution to the SDSU bench. On the free kick, Djeffal found Alex Cover in the box who dished it to Steffan Yeates who corralled the pass and then scored inside the far post.

The Aztecs squandered an opportunity in the 73rd minute when they were awarded a PK. Freshman Hunter George had hit shot saved by an Adrian Fernandez kick save.

The Aztecs travel across the country to take on Brown next Sunday at 11 a.m. PT.