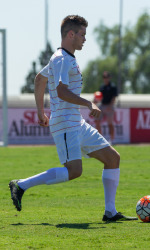 Aztecs to face Washington at home on Sunday

The closely contested match was scoreless until the 67th minute when Matt Callahan’s header from five yards out found the back of the net, putting SDSU in front, 1-0. The Aztec goal was set up by Michael Sauers, who deposited the ball into the far right wing where Dallin Cutler gathered the pass and directed it back to an awaiting Callahan, who fought through traffic in the center of the box.

However, OSU got the equalizer late in regulation when Hassani Dotson struck from 14 yards away on a pass from Eric Diaz in the 83rd minute.

“I thought our team came out very strong in the second half after an average first half,” said SDSU head coach Lev Kirshner. “We really did a good job to get up a goal. It was a very difficult game for both teams and 1-1 might be the right result, but I am very proud of the effort and what we did to make adjustments in the second half. We just have to get ourselves back ready for Sunday.”

The Aztecs played the final 18 minutes a man down after Debray Hollimon was given a red card near midfield with 80 seconds elapsed the first overtime period. The Scarlet and Black still managed to keep the Beavers off the scoreboard the rest of the way, with goalkeeper Adam Allmaras making the last of six saves on the night on David Norman Jr.’s attempt in the fifth minute of the first extra session.

The only shot of the second overtime belonged to SDSU, but Travis Nicklaw’s try was blocked by the OSU defense. The Aztec redshirt senior led the team with four shots, including one on goal in the 76th minute that was saved by Beaver goalkeeper Nolan Wirth.

For the contest, SDSU maintained a 5-1 edge in corner kicks, including two in the second overtime, but was unable to capitalize.

San Diego State returns to the pitch on Sunday, Oct. 2, when it faces Washington at SDSU Sports Deck, beginning at noon PT. Admission is free.