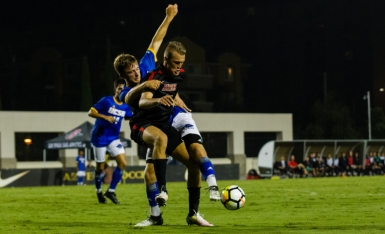 “They came out very motivated with a great game plan,” said head coach Lev Kirshner. “We made some adjustments in the second half, and were able to get the game back with the goal. It was a breakdown on our side so they could get the second goal.”

The Aztecs made it on the board first, with Jeroen Meefout using his 6’4” frame to his advantage and heading the ball over several USF defenders to score his second goal of the year on a Dallin Cutler corner kick in the 58th minute.

As time was winding down in regulation, USF picked up their offensive pressure that was featured in the first half and evened the game at 1-1 with Jorge Ruiz’s first goal of the year in the 84th minute. The Dons added a trio of shots after the goal to end regulation, but were unable to finish the game within the allotted 90 minutes.

Three minutes into overtime, USF’s Manny Padilla delivered a ball into the box to give Bryce Kaminski an opportunity to end the game and give San Francisco its first win of the season. Both of San Diego State’s setbacks this season have come in overtime fashion.

The Aztecs will cap off the Courtyard Marriott San Diego Central Tournament on Sunday, hosting Utah Valley at 7:00 p.m.