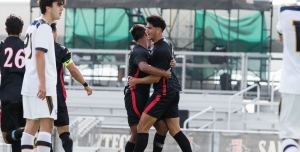 SDSU’s non-conference schedule consists of three matches against Big West schools, three from the WCC and one from the WAC. The Big West canceled the men’s soccer season last year.

The Aztecs will play a pair of exhibitions before beginning the regular season. First at UC Irvine August 15 and then SDSU will host California Baptist August 20th.

SDSU kicks off the regular season at home, hosting CSUN August 26, and then will play the next two on the road, playing at LMU August 30th and at Cal Poly September 3rd. LMU went undefeated in the spring, going 6-0-3 overall and 5-0-2 in the WCC.

The next five matches will be on the SDSU Sports Deck. The Aztecs welcome UC Davis September 10 and Cal State Bakersfield September. UC Davis went 13-5-2 in 2019.

SDSU begins Pac-12 play September 16th when they host California, followed by a home contest against Stanford. The Aztecs will then host Gonzaga September 24th.

SDSU will be on the road for the next six matches, a span of 41 days without a home contest. Their lone trip outside of California will be in the Pacific Northwest when they play at Washington (Sept. 30) and Oregon State (Oct. 3), both of which made the NCAA Tournament in the spring.

The Aztecs will return to Southern California with matches at UCLA (Oct. 8) and San Diego (Oct. 15), their final non-conference match.

SDSU then heads up to the Bay Area for meetings with Stanford (Oct. 21) and California (Oct. 24).

The Aztecs’ final three matches will be at home, beginning with contests against Oregon State (Nov. 4) and Washington (Nov. 7). They close out the regular season November 12 when they host UCLA for senior night.

All but two of SDSU’s matches will be in California.