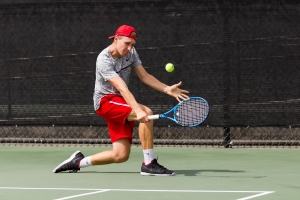 In his semifinal encounter, the Aztec sophomore recorded a 6-1, 7-5 conquest of UC Irvine’s Sasha Krasnov, who had previously defeated SDSU teammates Nicholas Mitchell and Rafael Gonzalez Almazan earlier in the bracket.

With his win, Kirchhoff punched his ticket to the finals, where he squared off against Arizona State’s Tom Wright, who rallied to defeat Cal Poly’s Alexander Stater in a super-tiebreaker, 4-6, 6-1, 10-2, in the other semifinal matchup.

After claiming the first set against Wright in nail-biting fashion, 7-5, Kirchhoff wasted little time against his Sun Devil adversary in the second, emerging triumphant by a 6-2 count to take home the crown.

With the decision, Kirchhoff won his fifth straight and improved to 8-4 on the year.

San Diego State returns to the courts in two weeks to wrap up its fall tournament schedule, traveling to the Central Valley for the Bulldog Classic, Nov. 2-4, in Fresno, Calif.