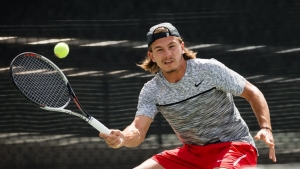 With their decisions, Kirchhoff will square off against Azusa Pacific’s Jakob Schnaitter in the quarterfinals on Saturday, while Restifo will battle San Francisco’s Nitzan Ricklis.

Rafael Gonzalez Almazan (Madrid, Spain) also emerged triumphant in his Flight B encounter with Boris Reckow of Saint Mary’s, dismissing his Gael adversary by a 6-4, 6-2 count. Consequently, the Aztec junior punched his ticket to the quarterfinals, where he will face Nevada’s Delmas N’tcha on Saturday.

Conversely, fellow classmate Nicholas Mitchell (Ojai, Calif.) was not as fortunate in his Flight C opener against Nevada’s Benjamin Campi, who erased an early deficit to prevail in three sets, 3-6, 6-4, 6-2. As a result, he SDSU junior will lock horns San Francisco’s David Woodland in the consolation semifinals on Saturday.

In earlier Flight B doubles action, however, Mitchell combined with Kirchhoff to pin an 8-6 defeat on the Saint Mary’s duo of Reckow and Brian Lee, advancing to the Saturday’s semifinals, where they will engage the San Francisco tandem of Ricklis and Ryan Marker.

On the flip side, Restifo and Gonzalez Almazan were upended in their Flight A opener, falling to USF’s Paul Giraud and Phuc Huynh, 8-6, which set up a date with Fresno State’s Cem Erturk and Patrik Pech in the consolation semifinals.

The Bulldog Classic continues on Saturday at Spalding G. Wathen Tennis Center with doubles play at 8:30 a.m. to be followed by singles matches.

Singles – Flight A First Round

Singles – Flight B First Round

Doubles – Flight A First Round

Doubles – Flight B First Round