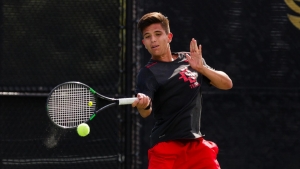 The SDSU tandem was one of the few bright spots for the team on the third and final day of the weekend event, posting an 8-5 decision over Nevada’s Daniel Dudockin and Matvey Radionov at Spalding G. Wathen Tennis Center on the campus of Fresno State.

Conversely, the Aztec pairing of junior Nicholas Mitchell (Ojai, Calif.) and Jan Kirchhoff (Berlin, Germany) came up short in their quest for the Flight B doubles crown, dropping a nail-biter to the Azusa Pacific duo of Leyton Boren and Ryan Nuno 8-7(3).

The Scarlet and Black was also denied in two championship singles finals on Sunday, as Restifo suffered a 6-3, 6-3 defeat at the hands of another Azusa Pacific adversary Jakob Schnaitter in the Flight A finals, while Gonzalez Almazan lost a tough three-setter to San Francisco’s Phuc Huynh in Flight B 6-4, 2-6, 6-2.

In an extra consolation match, Kirchhoff completed the weekend on a high note, rallying to win a super-tiebreaker over UC Davis’ Arjith Jayaraman 4-6, 6-4, 11-9.

San Diego State will have the next two-and-half months off before opening its 2019 dual-match schedule on Jan. 20 when it plays host to UC Santa Barbara at Aztec Tennis Center.