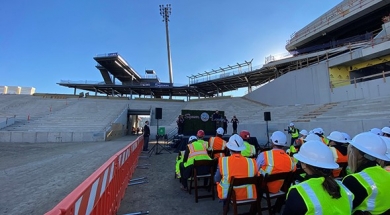 December 2, 2021 (San Diego) – The Sycuan Band of the Kumeyaay Nation and Sycuan Casino Resort will be San Diego State University’s inaugural Founding Partner for the new Aztec Stadium at SDSU Mission Valley, the university has announced.

As part of this agreement, when the stadium opens in fall 2022, both The Piers location and The Founders Club will bear the Sycuan name.

The Sycuan Piers are expected to become a signature feature of the stadium. The three piers feature 10,000 square feet of space that include 22 loge boxes, standing room for 500 individuals, three bars and a concession stand. The Piers, inspired by the coastline of San Diego, includes a section that juts out toward the field and will provide fans with a view of the action that is exclusive to the venue and will be instantly recognizable as Aztec Stadium.

“This is an extraordinary investment on behalf of the Sycuan Band in our university and in San Diego, especially given the importance this site has for our entire region,” SDSU President Adela de la Torre said at the announcement event at the site on November 16.

“It excites me that our inaugural founding partnership is with the great community and university partners in the Sycuan Band of the Kumeyaay Nation,” San Diego State Director of Athletics John David Wicker said. “SDSU and Sycuan have been partners on campus and the community through various educational opportunities and now we can add the stadium partnership to this expanding relationship.”

The Sycuan Founders Club is designed as an exclusive and prestigious hospitality area. Comprising four Founders Suites and 48 Founders Club Seats, the Club provides year-round access to every event in the stadium with an all-inclusive premium menu and hosted bar.

As part of the partnership, a tribute to the Kumeyaay Nation will be displayed inside the stadium.

Season tickets for the 2022 Aztecs football season in the new stadium will go on sale to the general public in January. Individuals interested in getting more information on tickets, or those interested in receiving updates when tickets are available, may sign up at AztecStadium.com.