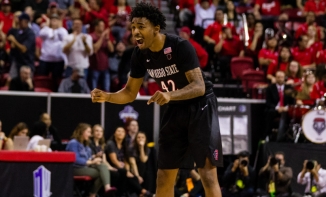 June 11, 2018 (San Diego) - San Diego State, the defending Mountain West champions, released on Monday its conference schedule for the 2018-19 campaign. The 18-game slate will begin on Jan. 5, at Boise State and end on March 9, at Nevada. All dates are subject to change as the MW’s television partners have not made their game selections.

The Aztecs will enjoy the first of two byes on the first day of the league season, while the rest of the conference’s 10 members are in action on Jan. 2. SDSU will ultimately step into the MW on Jan. 5, with a road date at Boise State.

SDSU will play two of its next three at home with Wyoming visiting Viejas Arena on Jan. 9, and New Mexico coming to The Mesa on Jan. 16. In between those dates is a road game at Air Force on Jan. 12. Following that stretch will be the Aztecs’ second bye (Jan. 19), which equates to 14 consecutive games to end the regular season.

San Diego State will begin the daunting task with a road game at Fresno State (Jan. 23) before returning to America’s Finest City for consecutive home contests vs. UNLV (Jan. 26) and Air Force (Jan. 30).

The month of February will have the Aztecs on the road for a majority of the time, starting with road tests at San José State (Feb. 2) and New Mexico (Feb. 6). SDSU will make a brief stop at home to face Utah State on Feb. 9, only to hit the road once again, this time going to Colorado State (Feb. 13).

Following its trip to Fort Collins, San Diego State will play three straight games in the Pacific Time Zone, welcoming Boise State on Feb. 16, and Nevada on Feb. 20. The third contest is a date at UNLV on Feb. 23. SDSU will close the second calendar month at Utah State on Feb. 27.

The Scarlet and Black completes its home portion of its 2018-19 slate against a pair of California State University schools in San José State and Fresno State. The Spartans make the trip to Southern California for a March 2 clash and the Bulldogs will make their annual appearance at Viejas Arena on March 6, for the Aztecs’ Senior Night game. SDSU will put the finishing touches on the conference campaign at Nevada on March 9.

The Aztecs this season will not travel to Wyoming or play host to Colorado State.

SDSU’s non-conference schedule will be announced at a late date.