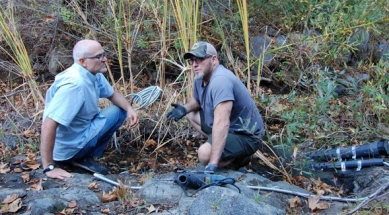 April 2, 2018 (San Diego) – The San Diego River is a capricious and temperamental thing. The first Spanish explorers who worked the land discovered this the hard way: Upon encountering the dribbling stream in 1769 that emptied into False Bay (today Mission Bay), they concluded it was nothing more than a tame trickle. A month later, they planted grains along its banks. Then the year’s first rains swelled the river and took out the crops. The next year, they planted farther back—only to experience a drought year that left their fields dry and withered.

The city may have changed in the intervening years but the river’s personality hasn’t. For most of the year, the San Diego River winds calmly through Mission Valley. But at the first whiff of a big storm, the river jumps its banks and floods road crossings, Fashion Valley parking lots and the grounds of SDCCU Stadium.

Predicting and managing the whims of the San Diego River—and monitoring how its health is affected as it runs through a heavily populated urban corridor—is a job Natalie Mladenov knows well. The San Diego State University environmental engineer has her hands in several projects aimed at measuring and restoring the health of the San Diego River. She and her colleagues are figuring out how restoration efforts can help mitigate the river’s sporadic flooding. Ideally, the river could one day be a point of pride and a landmark for the city.

“The San Diego River is already an amenity in some places,” Mladenov said. “It would be great to have an even more concerted effort to make the river and its tributaries an amenity to the whole community.”

Mladenov and fellow engineers Matthew Verbyla and Alicia Kinoshita, as well as biologist Thomas Zink and environmental health researcher Richard Gersberg, are involved in several projects studying riverine ecosystems throughout Mission Valley and in the river’s lower tributaries. The projects are funded by the San Diego River Conservancy and the San Diego Regional Water Quality Control Board.

All of these projects complement SDSU’s plans to develop a 50-acre community river park alongside the university’s proposed Mission Valley campus extension. The river park would restore the natural flow of the river near SDCCU stadium, helping to prevent flooding in the area and acting as a natural flood plain and sediment filter.

Mladenov adds that the university is in the process of hiring several new faculty members with water health and engineering expertise through its Blue Gold research program.

“I’d like to see SDSU be the institution taking the lead on research into the health of the San Diego River,” she says. “We’re going to be well-positioned to handle big projects on the San Diego River and other rivers in the region.”

Dealing with flooding and toxins

One prong led by Zink has focused on removing nonnative vegetation along Alvarado Creek, a tributary that runs right by SDSU’s Montezuma Mesa campus, crisscrossing a parking lot near student housing and a suite of offices, research centers and medical facilities just east of campus. Nonnative plants like Mexican fan palms, Chinese elms, castor bean and smilo grass grow wild along the banks of the creek, causing blockages and slowing its flow.

After two years of work pulling up these invasive species and helping native vegetation to return, Mladenov says the creek already appears to be in better shape. “Last year, we had huge rain events and nothing flooded,” she says. “It shows that removal of non-natives can also alleviate water blockages and reduce flooding.”

Contaminants are also a perennial problem for the Lower San Diego River, which runs through Mission Valley and out into the Pacific Ocean via San Diego Bay. The waterway has appeared in the Environmental Protection Agency’s Listing of Impaired Waters, which notes various points along the river that have dangerous or unacceptable levels of pollutants or bacteria. In an effort to better understand where these toxins come from, Mladenov and colleagues are sampling and analyzing the water from the river and its tributaries.

There are “distributed sources of pollution” throughout the river’s course, she says. In some cases, sewage from leaky pipes can makes its way into the dozens of tributaries scattered across the county.

Lawn care products like Miracle-Gro and weed killer can seep into the watershed after rains, contributing high levels of nitrogen and phosphate that serve as food for algae. And the river’s seasonal cycles can lead to unhealthy conditions: In the dry season, the river becomes nearly stagnant in places, forming low-oxygen pockets in the water that breed anaerobic bacteria.

Another source of pollution may come from homeless people who camp alongside the river’s banks. Rains flush human waste into the river, but it’s unclear exactly how this affects the river’s health, says Mladenov.

“That’s something we’re trying to quantify right now,” she says, “so that we can get a better grasp on the magnitude of this problem and help find resources to solve it.”

Further afield in the reaches of the Upper San Diego River, in the mountains of East County where the river’s headwaters lie, SDSU geography professor Trent Biggs and reserve manager Pablo Bryant are working with the San Diego River Park Foundation to establish baseline numbers for what healthy rivers and tributaries should look like.

The researchers recently installed a water monitoring station in a small spring-fed water hole along Boulder Creek. In the months to come, the station will wirelessly transmit water quality conditions from the relatively pristine tributary.

“Once we finally have a baseline, we’ll be able to better plan strategies for improving the health of these tributaries and the river,” Biggs said.