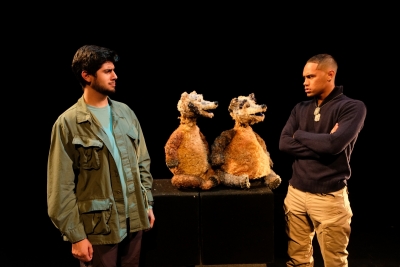 Directed by Randy Reinholz (Choctaw) in SDSU’s Experimental Theatre; production is a collaboration with LA theatre company, Native Voices at the Autry

Lying with Badgers is a Native play by Blackfeet playwright Jason Grasl.

“It is my first opportunity to work on a show by a Native American in my 22-year history at SDSU,” said Director Randy Reinholz. “I’m excited to learn more about people in our country that are often left out of the narrative in popular culture.”

Reinholz is an enrolled member of the Choctaw Nation of Oklahoma and was recently awarded the SDSU Alumni Distinguished Faculty Award.

Wisecracking puppets push Russell to confront questions about his identity and the pain of his fractured family in this Native comedy exploring family and community legacy. The audience will laugh while we come to know the Badger Two Medicine Area.

“The play intermixes realism with magical realism and how can native people embrace modern ways of living and integrate their own cultural practices and language in the whole of their lives,” said Reinholz.

The production is a collaboration with the LA-based theatre company, Native Voices. Reinholz is the Director and Co-Founder of Native Voices, whose mission is to provide breakthrough plays and diverse programming, highlighting the unique points of view within Native American nations throughout North America.

Lying with Badgers will run Nov. 1 through Nov. 10, Wednesday, Thursday, Friday and Saturday at 7:30 p.m. and Sundays at 2:00 p.m. Tickets are $20 general admission and $17 for seniors, military and students. For tickets, directions and parking information, visit ttf.sdsu.edu.

For more information about this and the many other Arts Alive SDSU performances, concerts, and exhibitions visit artsalive.sdsu.edu.

ABOUT THE SDSU SCHOOL OF THEATRE, TELEVISION, AND FILM

The San Diego State University School of Theatre, Television, and Film combines the arts with the traditional roles of the university by teaching the theory, history, literature, and crafts of theatre and film. The School works to benefit the community by providing educational and entertaining arts performances, particularly to San Diego youth.  Utilizing innovative curriculum, interdisciplinary initiatives, and research into evolving technologies, the School is committed to preparing the next generation of entertainment arts professionals. The SDSU School of Theatre, Television, and Film provides transformative, experiential learning that prepares students to launch creative careers. For more information, visit ttf.sdsu.edu.

The mission of the Autry Museum of the American West is to bring together the stories of all peoples of the American West, connecting the past with the present to inspire our shared future. Native Voices is devoted to developing and producing new works for the stage by Native American, Alaska Native, and First Nations playwrights, and to championing Native theatre artists nationally. The Company's vision is to put Native narratives at the center of the American story in order to facilitate a more inclusive dialog on what it means to be American.