September 27, 2012 (San Diego)--After a rather lackluster first half, the No. 17/25 San Diego State women’s soccer team used a dominating second half to defeat UC Irvine, 3-2 last weekend  at the SDSU Sports Deck, moving  to an 8-1-1 record for the season. 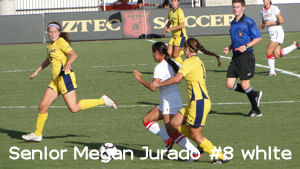 UC Irvine was  first to get on the scoreboard in the 13th minute when Cami Privett sent a beautiful through pass to Natalia Ledezma, who shot it over SDSU redshirt sophomore goalkeeper Rachel Boaz to give UC Irvine a 1-0 lead.

The Aztecs answered right back in the 38th minute, when junior Jensen Skinner shot the ball right through the hands of UC Irvine goalkeeper Corey Tobin.

But the Anteaters were not done scoring in the first half. This time it was Ledezma with the assist, as she found Jackie Samis-- who lobbed it over Boaz to give UCI the 2-1 lead after 45 minutes.

“We were stagnant in the first half with our movement. We were getting in on tackles, we weren’t mentally in it,” SDSU head coach Mike Friesen said.

But it was not the same Aztecs’ team in the second half. SDSU attempted five shots in the first five minutes of the second half before finally finding the back of the net in the 57th minute. Senior Megan Jurado received the ball on the left side of the box and landed it in the top right corner of the goal to tie the game at two. This was Jurado’s team-leading fifth goal on the season. 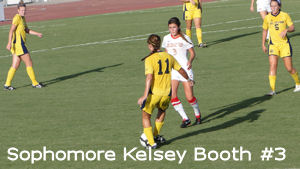 Less than three minutes later, SDSU got its game-winner. Sophomore Haley Locker  found a wide-open Skinner in the middle of the box and Skinner knocked in the game-winning goal to give the Aztecs a 3-2 win.

“Haley Locker was tracking down a ball on the opposite side of the field, she was working her butt off and she crossed it, I got it and was able to put it in,” Skinner said.

The two goals were Skinner’s first as an Aztec.

“She’s been on the verge of scoring and was frustrated about it,” Friesen said of Skinner. “She spent extra time after training all week working on her finishing, so for her to get those two goals is just awesome. I’m really proud of her.”

The Aztecs outshot the Anteaters, 23-6 (5-3 in shots on goal) and Boaz finished with one save to earn her eighth victory of the season.

“We didn’t come out and play like we’re capable of in the first half,” Friesen said., but added, “What an outstanding second half we played! To come back from a goal down and win 3-2 in regulation, I couldn’t be happier about that part, but definitely want to have that be the lesson learned on not playing our best soccer in the first half.”

What a come back! I remember watching this game with our family. My niece was on this team! Go Aztecs!