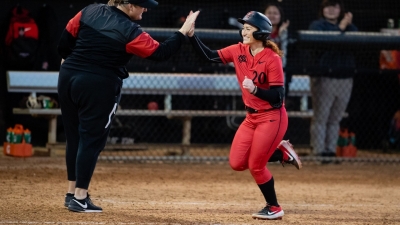 April 10, 2021 (Santa Barbara) - Shelby Thompson homered three times and had a combined six RBIs to lead the San Diego State softball team to a doubleheader sweep over Santa Barbara Saturday afternoon at Campus Diamond. The Aztecs (17-11) opened the day with a 10-0 six-inning run-rule victory before beating the Gauchos (8-20) 6-2 in the nightcap.

In the first game, Thompson had a pair of home runs, including a grand slam, and rode the arm of Maggie Balint for the 10-0 win.

Thompson was 3-for-3 with two homers, five RBIs, three runs, a hit by pitch and a stolen base. The senior singled and scored in the top of the first inning, was hit by a pitch in the second, led off the fifth with a home run and hit a grand slam in the sixth.

On the other side of the ball, Balint (11-5) combined on a one-hit shutout with Karina Faasisila. The right-hander allowed only one hit - a one-out bunt single by Rayna Cohen in the bottom of the fourth - and three hit batters in five innings, while striking out seven. It was the second straight shutout Balint was a part of after recording a solo shutout in a 3-0 SDSU win at Boise State on April 3.

Faasilia relieved Balint in the sixth with San Diego State in control of a 10-0 lead and gave up one hit in a scoreless inning of work.

Jillian Celis added two hits, including an RBI double, while Riley Thies drew a bases-loaded walk in the sixth prior to the Thompson grand slam, two walks total and scored two runs.

In the nightcap, SDSU outhit UCSB, 12-5, and used a quality effort from Marissa Moreno in the circle to record the 6-2 victory.

San Diego State scored the first four runs of the game. In the top of the second, Celis scored on a single by Alyssa Pinto. Alexa Schultz then doubled in Eliana Reyes in the third. The Aztecs also used solo home runs by Celis in the fifth and Thompson in the sixth to take a 4-0 lead.

Faasisila relieved Moreno in the sixth, but UC Santa Barbara halved SDSU’s lead on three hits and a San Diego State error. Balint came in for Faasisila in the sixth and, after allowing an RBI single to Ashley Donaldson, retired the final four batters she faced for her first save of the season. Faasisila was saddled with two runs (one earned) on two hits in 1/3 innings.

The Aztecs tacked on two insurance runs in the seventh when Schultz scored on a fielder’s choice RBI by Makena Brocki and Celis scored on a bunt single by Pinto.

Celis was a triple shy for the cycle and scored three runs, while Pinto added three hits and two RBIs in just her fourth start of the season. Jenna Holcomb contributed two hits, Thompson hit her solo home run and was hit by a pitch twice, and Schultz had the RBI double, walked and scored a run.

San Diego State went 19 innings without allowing a run until the sixth inning of the second game today.

Shelby Thompson was hit by a pitch three times today and now has 26 for her career, breaking Sydnee Cable’s school record of 25 set from 2014-17.

The Aztecs will look for the series sweep on Sunday. First pitch is set for noon.