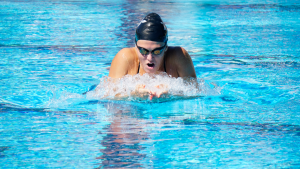 UCLA was also at the meet, but the Aztecs competed solely against the Toreros.

Elli Ferrin was the top Aztec finisher in the pentathlon events and was followed by McKenna Meyer and Evonne Stehr. SDSU topped the Toreros in every pentathlon event and earned the most points possible.

This marks the tenth consecutive season SDSU has opened its season with a pentathlon meet against San Diego, and the Aztecs have won nine of the last ten season-opening meetings.