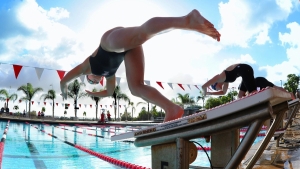 Aztecs improve to 6-0 in dual meets this season

November 30, 2018 (San Diego) - The San Diego State swimming and diving team defeated Pepperdine 141-132 in a dual meet the Aztec Aquaplex on Friday afternoon.  With the win, the Aztecs improve to 6-0 in dual meet competition on the year.

SDSU started its afternoon off claiming the top two spots in the 200 medley relay. Alma Thormalm, Morganne McKennan, Lizzie Menzmer and Sammy Geyer recorded a race-best 1:44.58 while Elli Ferrin, Klara Thormalm, Ava Howard, and Peyton Wilson teamed up for a second-place time of 1:46.66.

Kassidy Henson, Rachael Kelch and Andy Felix took the top three spots of the 200 fly, respectively, with Henson posting a first-place time of 2:05.67.

With the win, SDSU improves to 6-0 against Pepperdine over the last three years.

The Aztecs continue action at the Aztec Aquaplex on Wednesday, Dec. 19 when they host Air Force and Cal Poly for a 10:00 a.m. dual meet.