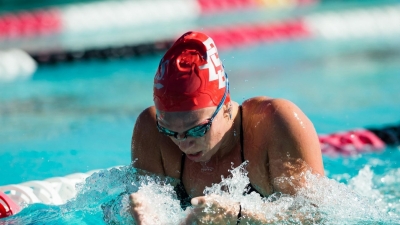 November 21, 2021 (Houston) - The San Diego State swimming and diving team posted three B-cut times, won two events and had 11 top-five placings on the final day of the Phill Hansel Invitational, but it was not enough to hold off the Houston Cougars and finished in second among the nine-team competing.

The final day of competition opened with the 1650 Free and Ryan Dulaney, the lone Aztec in the event, stopped the clock in 17:19.89 and in 15th place.

Riley Tapley, in the second race of the session, produced a B-cut time of 1:56.10 in winning the 200 Back. Alex Roberts was fifth in 1:57.85, and Mai McKenna swam a 2:01.48 for a 10th place finish. Tapley had posted a B-cut time in the prelims but trimmed more than half a second off that time in the final.

San Diego State had three swimmers in the top eight in the 100 Free, led by a second-place finish from Sammy Geyer who stopped the clock in 49.73. Meredith Smithbaker was seventh and Mia Ryan was eighth, in times of 50.42 and 50.71, respectively. Evonne Stehr was 32nd after clocking a 52.34, and Cathy Cooper swam a 51.99 for the 37th place time.

San Diego State’s 400 Free Relay team of Thormalm, Smithbaker, Geyer and Murphy placed second in a time of 3:16.56. Ryan, Menzmer, Gebhardt and Stehr swam as an exhibition and hit the wall in 3:27.63. Two other Aztec teams were also exhibitioned: Fiona Trotz-Chavez, Cassie Phillips, Dulaney and Cooper posted a 3:29.47 and Lauren Torchiana, McKenna, Tapley and Paige Mitchell came home in 3:30.14.

The Aztecs have a month to prepare for the team’s next competition, its home opener, which is scheduled to be a dual meet against Cal Poly on Dec. 20 with the first swim set to get under way at 10 a.m.