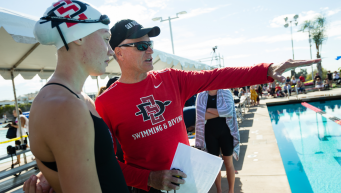 August 27, 2018 (San Diego) - Head coach Mike Shrader of the San Diego State swimming and diving team has released the team’s 2018-19 schedule, it was announced on Monday. The Aztecs begin its 2018-19 season on Sept. 14, when they host San Diego for the annual crosstown pentathlon meet at the Aztec Aquaplex.

After a 13-day break after the road trip to Fresno, SDSU wraps up its October slate at UC San Diego, where it will face the Tritons, Boise State and UC Davis on Oct. 19. The Aztecs will then have close to a month to prepare for its biggest test of the fall semester at the Mizzou Invitational in Columbia, Mo. on Nov. 15-17.

SDSU battles San Diego for the second time during the 2018-19 campaign on Jan. 18 at USD. SDSU’s final regular-season test will come at Loyola Marymount, where the Aztecs and Lions square off in a dual meet on Feb. 2.

SDSU’s divers will look to qualify for the national meet at the Zone E Diving Championships in Flagstaff, Ariz. on March 11-13. The NCAA Championships will take place in Austin, Texas from March 20 - 23.

SDSU returns eight all-Mountain West performers from last season, including rising junior Courtney Vincent, who qualified for the NCAA Championships in the 100 fly last season. Shrader enters his 12th season at the helm for SDSU and has accumulated a record of 136-15 in dual meets.