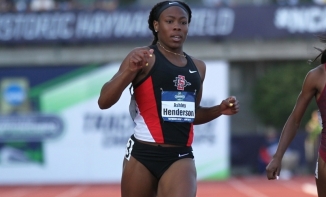 June 9, 2018 (Eugene, Ore.) - Ashley Henderson finished in sixth place in the 200 meter dash at the NCAA Championships Saturday evening at historic Hayward Field on the campus of the University of Oregon.

“I ran with everything I had inside of me,” Henderson explained. “Of course I’m disappointed with my placement, but ultimately I’m more proud with myself because of how far I’ve come.”

Although Henderson had to face a headwind of 2.3 meters per second, the rain did let up minutes before the 200 began. The track was still extremely wet though.

“These conditions weren’t too new to me,” Henderson explained. “Being from Missouri, I ran in weath­er like this all the time. But being in San Diego the past few years, we hardly train in weather like this.”

Henderson leaves San Diego State as a 12-time All-American (a nine-time First-Team All-American) and won a school record 14 Mountain West Championships. She also has four school records and was the Mountain West’s Most Outstanding Performer at the last five conference championships, a conference record. Henderson will now be joining the professional ranks with hopes of competing at the 2020 Summer Olympics.

Despite the wet conditions, 12,998 fans came out to watch the Championships. The attendance for Thursday’s semi-finals was 9,702.

“I’m proud to be an Aztec. That’s all I can really say. I’m extremely grateful for the support I’ve had at SDSU; the coaching staff has been phenomenal. The Aztec community has always has this unconditional love and support for me. I’m truly grateful for that. It’s been a nice journey.” Ashley Henderson