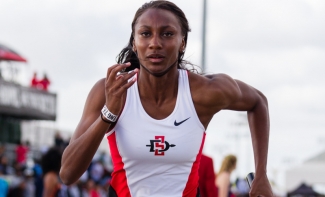 May 26, 2018 (Sacramento) - The San Diego State Track & Field team wrapped up the final day of the NCAA West Preliminary Championships by qualifying both relay teams and Ashley Henderson in the 200 meter dash to the NCAA Championships.

In total, San Diego State will be represented at the NCAA Championships by both relay squads, Lisa-Anne Barrow in the 400 and Ashley Henderson in both the 100 and 200.

Henderson finished second in her heat and had the third best time of the evening, finishing in 22.82 seconds to advance to Eugene. This is the third straight year Henderson will compete in both the 100 and 200 on the national stage.

The Aztecs’ 4x100m relay team of Callista Fletcher, Simone Glenn, Rochene Smith and Lisa-Anne Barrow came in second in their heat and sixth overall with a time of 44.39. This is the third consecutive year SDSU has had a 4x100m relay team qualify for the NCAA Championships. Glenn has been a part of each of those squads.

The Aztecs closed out the evening with a strong qualifying performance in the 4x400 relay. Lakin Hatcher, Jalyn Harris, Tyra Lea and Barrow finished in 3:36.08 to become the first SDSU 4x400 relay team to advance to nationals since 2006.

The Aztecs will have next week off to prepare for the NCAA Championships in Eugene, Ore. June 6-9.